Archive for the tag “Hyperion”

Well Tuesday was another fun and fact filled day at the annual ODTUG KScope conference in New Orleans.

As we do each morning, the first event is Morning Chi Gung. This morning the group grew again to 22 participants who met at 6:45 AM (yes it is early) to walk down the street a few blocks to get in some morning moving meditation. Today we even picked up a few “strays” who joined us (folks not part of the KScope event).

Only in New Orleans would people wander by and join an Ad Hoc exercise and meditation class.

After that is was back to the hotel, breakfast, a quick shower, then my first session.

To start off I went to the SQL Developer Hands-on Lab run by Oracle Product Managers Jeff Smith and Ashley Chen. We had a very nice lab (downloadable from OTN) on how to use SQL Developer for Tuning database queries.

It was very education and useful for me. I even learned a few new options in the tool I had not seen before.

Next, after writing yesterday’s blog post, I got to participate it an ODTUG annual session – the BI Panel Lunch and Learn.

This year they improved it by allowing 30 minutes first for everyone to eat before we started the discussions and questions. Much better (at least for us panelists!).

We had a great and interactive session with lots of give and take and a few somewhat controversial comments from Dan Vlamis to liven things up a bit. Our esteemed moderator, Mark Rittman, did an excellent job of prompting us with relevant questions and controlling the flow of the conversation so everyone had their say. Rounding out the panel was Gurcan Orchan, our resident ODI expert (amoung many other things)

After the panel I went on to see my friend Ashely Chen introduce people to SQL Developer Data Modeler in her Data Modeling 101 session. 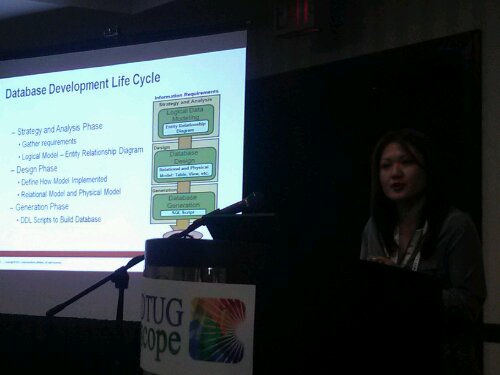 Ashley dd a great job setting the stage by showing people what is meant by data modeling and how it fits in the life cycle of developing a database. She then showed many of the basic features of Oracle Data modeling tool.

After Ashley’s session then I had my final presentation on my Top 10 Cool Features in SQL Developer Data Modeler. Ashley and Jeff Smith both attended along with 20-30 other folks as I ran down my list of things I use and like in the tool.

The talk went well with some good questions about the product and how to use it (except for the fact I kinda ran out of time and had to rush the last 3 features). I got some great feedback from Jeff and Ashley on the talk and an excellent suggestion for my next talk. 😉

This was a KScope first -sessions about topics aimed at people on the other side of the fence. So this session was for database people who know nothing about the Hyperion and Essbase products that Oracle acquired a few years back.

It was an excellent session, even if not highly attended (something about being after the happy hour in the exhibit hall perhaps?). 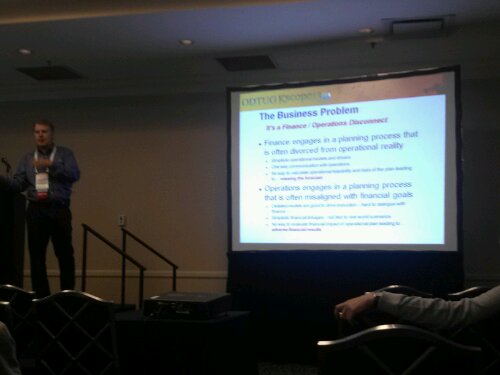 I learned that they are solving many of the same problems as we database people do but just with a different technology. Some of the terms are used a little differently. For example what they label as BI is much broader than I tend to think of – to them it is basic reporting against an ERP. I tend to associate BI with a data warehouse or a data mart (but the data comes from an ERP or operational system originally).

We also got a full list of some of the pre-packased applications that Oracle provides in this space. Very focused on financial solutions.

During the Hyperion 101 session, Andy discussed all the pre-built packaged analytic application that Oracle offers.

The really cool thing I learned was what Essbase stands for:

After that it was off to another fine dining experience in the French Quarter.

Probably not going to lose weight on this trip!

C’ya! Tomorrow I should be reporting on our big event!

Another First at ODTUG’s #Kscope13

Those crazy kids at ODTUG have done it again!

At this year’s KScope in New Orleans this user group is introducing an evening of crossover sessions. Over the years the event has grown and actually blended the traditional Oracle database development world with the world of EPM, Hyperion, and Essbase.

In fact many folks who have come down the typical Oracle development path, myself included, know very little about the other side. So for these past few years at the conference we found there were not a lot of people crossing the various tracks (after all there are so many options to choose from).

In order to promote better cross pollination and as a way to encourage folks to expand their horizons and start to understand the “other” side, ODTUG has added two evening sessions on Tuesday so that we can gain that knowledge and not have to skip any of our regualr sessions.

The sessions will be presented by seasoned ODTUGers and Oracle ACEs. Check out these sessions:

Oracle Database Tools 101: How Does All This Stuff Get Built Anyway?

If you’ve been an Essbase/Hyperion, Applications, or BI user you may wonder what all the “hubbub” on the other side of Kscope is all about. Or maybe you’re curious — “I know there’s a database under the covers and lots of developers; what do they do?” If you want to know about the underpinnings of your favorite Oracle software, this session is for you. We’ll talk about how it all fits together: database, SQL, PL/SQL, ADF, Forms, APEX, and more (without too many boring details)! Attending this session will improve your understanding of and ability to communicate with the “bit-twiddlers” in your organization.

Hyperion 101: An Introduction to the Oracle Enterprise Performance Management Suite

Have you been hearing all this talk about Oracle Hyperion? Are you wondering what exactly an Essbase is?

This is the session for those who are looking for an introduction into Business Intelligence and Enterprise Performance Management. We’ll start with the core business problems that are addressed with these products. The session will then include an overview of all the products that cover the Oracle Hyperion Suite and what each is best used for. We’ll finish this session covering a variety of reporting options including OBIEE.

If you have not yet signed up to attend KScope13, it’s not too late. Just get on over to the registration page and get in on the learning!

See you in New Orleans!

P.S. I will of course be there so be sure to look me up and attend one of my sessions.