Archive for the tag “@oracleopenworld”

Yes boys and girls, it’s that time of year again.

Time for Oracle Open World 2013 at the Moscone Center in San Francisco USA.

Time to catch up on all things Oracle.

Big things I expect to hear about this year?

And of course my good friends at ODTUG have put together another stellar lineup of Oracle ACEs, ACE Directors and all around Oracle guru’s to kick the week off with the best technical content about Oracle and Oracle tools in the known universe (seriously that is not an exaggeration).

There are sessions on database development, APEX, Hyperion/EPM, ADF, and the Oracle BI applications.

It will be an awesome day of learning.

Check out the full agenda and details here.

Then click on the OOW button on the upper right to register for the conference. Rooms are going fast and you do not want to miss this.

See you in San Fran!

p.s. As usually the music line up for the annual appreciation event is amazing too!

Hard to believe, but here we are again – almost time for Oracle OpenWorld 2012.

Will you be in San Francisco September 30 – October 4th? I will.

This year, along with the usual keynotes, exhibits, and sessions, Oracle is introducing the first every Oracle Music Festival. Like the famous SXSW festival in Austin, Texas, this festival has a stellar lineup of exceptional performers who will be playing at venues all around downtown San Francisco.

Something for everyone – rock, jazz, pop, blues, and reggae. And the hottest DJ’s in SF.

All free for attendees.

Check out the details here.

Of course  the real reason we all go is to network with colleagues and Oracle folks and get the scoop on the newest stuff.

Once again this year, my  favorite user group (ODTUG) has put together an outstanding lineup of speakers giving presentations throughout the week as well as five stellar symposiums running in parallel on Sunday.

We’ve got ACEs, ACE Directors, and just the best and brightest Oracle developers in the world.

Hope you are registered and ready to get in on the action.

Look me up in San Francisco!

P.S. Anyone up for Chi Gung? Drop me a line if you are.

Well the final day of KScope12 finally arrived and it was another hot one with the final sessions and the Texas heat. Another bright red sunrise greeted us as it has all week. 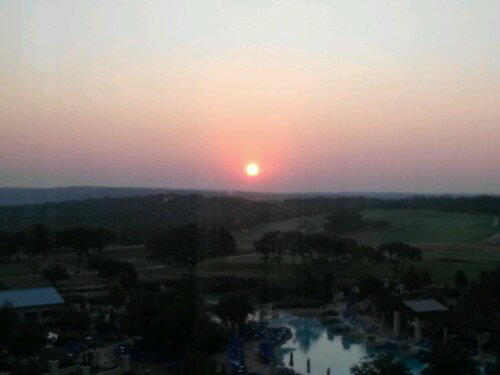 Today I managed to get a picture of the group that showed up for Chi Gung every day at 7 AM. We even had some new people today (officially the last day). They all enjoyed the sessions and learned (hopefully) enough to practice a bit once they return home.

I am grateful to all the participants for showing up early each morning with enthusiasm and a willingness to try something new. It made my job to lead them much easier. (There will be a You Tube video sometime next week for people to review, so stay tuned)

The first order of business for the day (after Chi Gung) was the official KScope closing session. Even though there were still two sessions to go afterward we had the closing at 9:45 AM. We were entertained, yet again, with some photo and video footage taken throughout the week, including one interview with me! We also learned who got the presenter awards for each track and for the entire event.

Then we all got beads to remind us to go to KScope13 in New Orleans.

Next was my final session for the event: Reverse Engineering (and Re-Engineering) an Existing Database with Oracle SQL Developer Data Modeler.

I had a surprising number of people for the last day after the closing session. I think there was about 70 people wanting to learn more about SDDM. Apparently most people are unaware of the features of the tool (which I have written about on several posts).

So, that was nice.

Finally I went to JP Dicjks talk about Big Data and Predicting the Future.

His basic premise is that we should now never throw away any data as it all can be used to extend the depth of analytics. We can react to events in real time and proactively change outcomes of those events.

The diagram above shows the basics of one way that data moves through the world and into the Hadoop file systems. I am oversimplifying but it is a cool diagram.

Part of the challenge is uncovering un-modeled data. I guess that is where the recent Oracle acquisition, Endeca, comes in with their Data Discovery tool (again oversimplifying) .

And that was pretty much it for the show. It was a great week with lots of learning and networking (and tweeting). We all had a good time and learned enough to make our heads explode.

I look forward to meeting folks again next year at KScope13 in New Orleans.

Get your free pass!

Don’t forget that the deadline for submitting to Oracle OpenWorld 2012 is Monday April 9th.

Check my earlier posting for the details, but don’t forget to say ODTUG sent you, then I will personally get to review your abstract.

Really, that is a good thing 🙂

Hope to see you in San Francisco.

Oracle User Groups: Are you a member?

Getting introduced and involved in them has made a huge difference in my career. If it was not for all the people I have met in the last 22+ years, my career, and life, would have been very different.

I have met hundreds (maybe thousands) of amazing people both from within Oracle Corp and outside. Many of them became, and remain, my friends. Which is why we all love to get together several times a year at various user group and industry events to catch up, exchange wars stories, and learn new things.

Right now, I am starting to prepare for one of my favorites – ODTUG KScope. I will be there presenting in June and  running my popular Morning Chi Gung class for the 2nd year in a row.

If you have not registered, get to it! Rooms are going fast and you want to be sure to stay at the conference resort (yes – resort, not hotel!).

And on the ODTUG front, they have just announced you can now join for just $99 a year. That is the best value you can find for the world’s best Oracle user group for Developers.

So are you in? Are you at member of at least one user group?

What? You don’t know which one to join?

Then check out this new cool site Oracle just put up with videos from some of the user group leaders. After that, check out their new User Group Central with information about Oracle user groups around the globe.

So get out there and meet some new people and learn some new things.

See you in San Antonio.

P.S. Don’t forget to submit an abstract for Oracle OpenWorld before the deadline passes. It will get you a free pass to the show (worth over $2000). Tell’em ODTUG and the Oracle Data Warrior sent you.